When I was young I came up with one of my many life theories with regard to putting on weight. The theory was to do with the consumption of doughnuts, because I believed in some weird logical way that they were mostly responsible for a person’s weight gain. I had a very limited view of foods back then.

My theory was that if you could identify the doughnut that made you fat, you could avoid eating it, and thus continue to eat as many doughnuts as you like without any weight gain occurring whatsoever

I cannot say that I was a bright child and I cannot say I have gotten any smarter as an adult either. 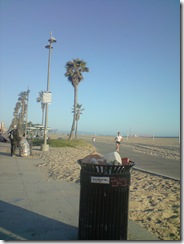 The same theory applies to bullets. If you own the bullet that has your name on it, and you are not feeling particularly suicidal, then the theory holds that you can never get shot. Unless someone created more than one bullet with your name on it, right?

By that line of reasoning, you can ask, "Which note made you a musical maestro?" Find that one note, and play it. Instant maestrosity.

You can apply the same logic to business deals. Find the one that will make you rich beyond your wildest dreams and make that sale. Instant riches.

This is the reasoning people use when they seek out the secret to being rich, being successful, being productive, being disciplined, or being creative.

Don’t bother me with the details, just tell me what I need to know.

What’s the secret? Tell me the secret. There has to be a secret.

But you already know the answer. All of the doughnuts you ever consumed are connected in a long unbroken chain, just like every musical note you ever played, every literary word you ever wrote, and every little act of business you ever committed.

So which doughnut made you fat?

I've founded/co-founded six businesses as CEO and been hired as engineer #1/CTO at six others.

I am a cross-platform mobile developer

I am a broken project fixer

I am a trained chef

I was in a punk rock band

I used to race motorcycles

I am a furniture builder

I am a growth hacker

I was a journalist

I am a hardware hacker

I think too much

Over the years I have built digital and physical products that have become household names.

Everything from video games to medical devices.

If there is one thing I understand, it's building products, putting them in the hands of users, and building a business around that product.

Throughout my career I've raised large sums of money dollars for the start-ups I've worked with, and generated more than a billion dollars in measurable real-world value.

You can hire me on a consulting basis as either a fractional CTO or mobile developer by contacting my agent at 10x Management.

I have on more than one occasion been described as a "Hell of a Nice Guy." I am still trying to live that down and prove the world wrong.